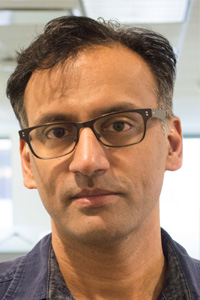 Sundeep Rangan received the B.A.Sc. at the University of Waterloo, Canada and the M.Sc. and Ph.D. at the University of California, Berkeley, all in Electrical Engineering. He has held postdoctoral appointments at the University of Michigan, Ann Arbor and Bell Labs. In 2000, he co-founded (with four others) Flarion Technologies, a spin off of Bell Labs, that developed Flash OFDM, one of the first cellular OFDM data systems and pre-cursor to 4G systems including LTE and WiMAX. In 2006, Flarion was acquired by Qualcomm Technologies where Dr. Rangan was a Senior Director of Engineering involved in OFDM infrastructure products. He joined the ECE department at NYU Tandon (formerly NYU Polytechnic) in 2010. He is a Fellow of the IEEE and Associate Director of NYU WIRELESS, an academic-industry research center researching next-generation wireless systems.